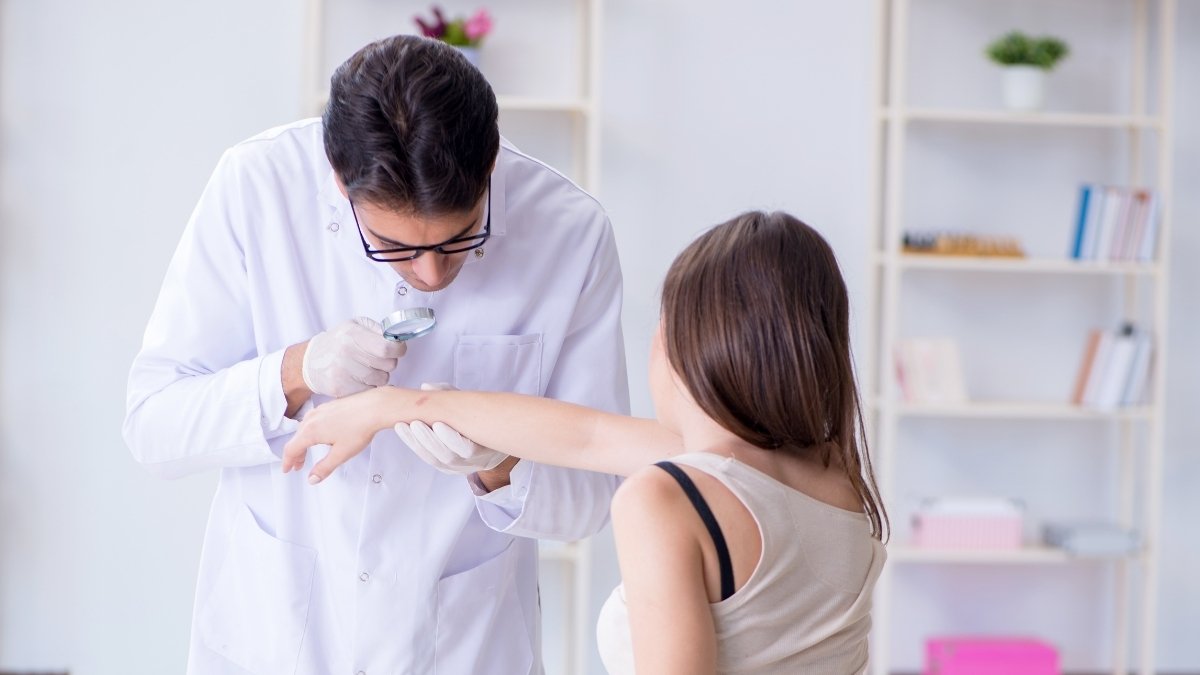 Rash, often known as dermatitis in medical terms, is defined as the swelling and irritation of the skin. It is characterized by red, dry, itchy, scaly and blistered skin. Sometimes rashes are the primary symptom of some underlying condition. Primarily there are three types of rashes:

1. Eczema –  It is known as atopic eczema and it can lead to dry and bumpy areas around the knees and elbow. If it is left untreated, it can cause red, scaly and swollen skin.

2. Irritant contact dermatitis – It occurs when an individual comes in contact with something irritating such as chemicals and soap.

3. Allergic contact dermatitis – This type of rash occurs when an individual comes in contact with something he or she is allergic to. It can cause a red and scaly rash.

Rashes can be serious and there are some life-threatening diseases that may have rashes as its primary symptom such as:

The initial manifestations of this disease are fever and flu-like symptoms and it also involves the skin and mucosa. Mostly the symptoms on the skin arise two to three days after exposure. It is accompanied by large blisters, vesicles, and bullae. Sometimes, the large wound area can lead to the occurrence of severe pain, massive loss of fluid and protein. It can also lead to electrolyte imbalances, bleeding, insulin resistance, hypovolemic shock with renal failure and multiple organ dysfunctions. Toxic epidermal necrolysis is immune-mediated disease. Immune-mediated diseases are the disease which occurs as a result of a dysregulation of the immune response.

Pemphigus is a rare autoimmune disease which is characterized by cutaneous and mucosal blistering. It can lead to severe blistering of the skin and the mucous membranes lining the mouth, nose, throat, and eyes. It is the autoimmune disease which means that the immune system fails to function normally. Normally, the immune system in the body acts as a defensive system and make antibodies to fight infections. These antibodies do not attack the body but sometimes these antibodies work against these tissues in the body. The problems with the skin occur when antibodies attack proteins known as desmogleins. These proteins are present in the cells of the layers of the skin and it is responsible for holding the cells of the skin together. When the antibodies attack the protein, it leads to separation of the cells and causes blisters and erosions.

Also Read: Get to Know Cellulitis!

The quality of life is severely affected in people suffering from this skin disease. Skin erosions or the sores are painful and it has a major impact on an individual. It also leads to disturbed sleep. Whereas, lesions that occur in the mouth or throat interfere with eating and it can lead to weight loss. Also, it can affect genital areas and cause problems like painful sexual intercourse, and problems with urination and bowel movements. Other problems that can occur in people having pemphigus include conjunctiva of the eyes, stuffiness and red eyes.

Toxic shock syndrome is a severe disease which is associated with a lot of complication. It is characterized by the sudden onset of fever, generalized erythroderma, rapid-onset hypotension, and signs of multisystem organ involvement, including profuse watery diarrhea, vomiting, conjunctival injection, and severe myalgia. Pain is the common and initial symptom of toxic shock syndrome and it usually involves extremity. Toxic shock syndrome is categorized into two types:

Staphylococcal scalded skin syndrome is an extremely rare condition in adults but it is common in infants and children. It is characterized by reddening and blistering around the mouth, nostril and periocular areas and it is accompanied by systemic symptoms such as fever, irritability, and poor appetite.

Staphylococcal scalded skin syndrome is a disease which is caused by the bacteria, staphylococcus aureus. This bacteria produces the toxin and damages the outer layer of the skin and cause it to shed. When staphylococcus infection infects the skin, it can cause small blisters. Whenever any impairment occurs with the kidneys or the immune system, it increases the risk of developing this disease. Normally, the immune system and the kidneys protect the body from bacterial toxins and whenever any impairment occur with these, the bacterial toxin can enter the bloodstream and circulate around the body affecting most of the body’s surface.

Tags: Viral rash in adults, Rash after surgery, Rash and diarrhea in adults